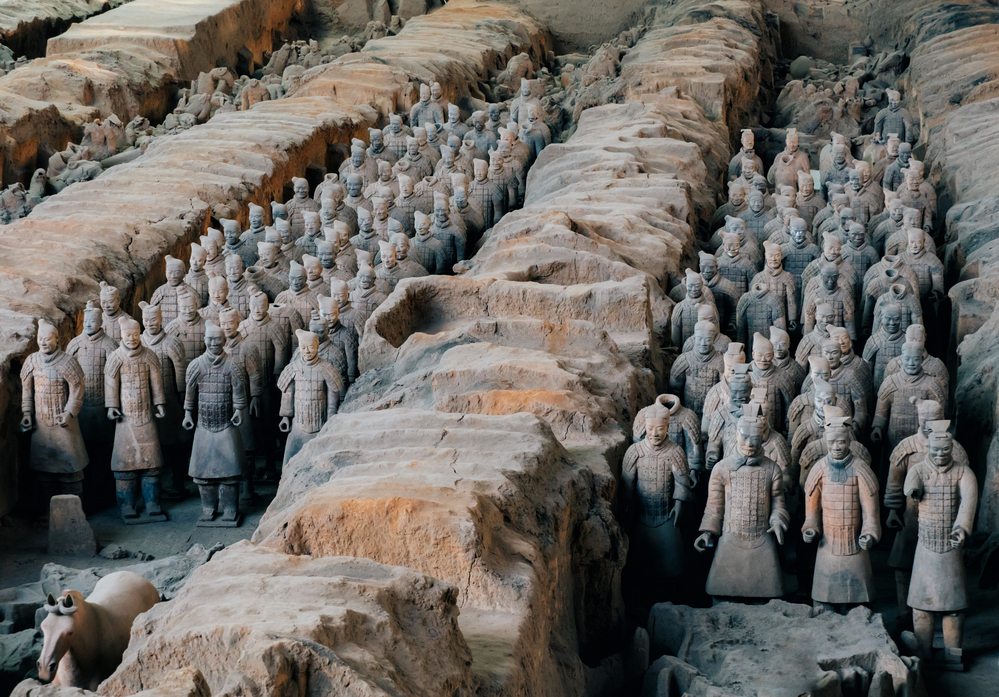 We rolled into Xi’an on the bullet train on 5/27, which was a great experience. We rode first class seating, which was nice, on a slightly older generation train. There was no WiFi, but the train easily surpassed 180 mph. With a few stops, we went from Beijing to Xi’an. I much prefer being on the ground as opposed to traveling by plane, and would support building a nice bullet train triangle in Texas between Houston, Austin, and Dallas. By bullet train, each respective journey between the cities would take less than an hour! 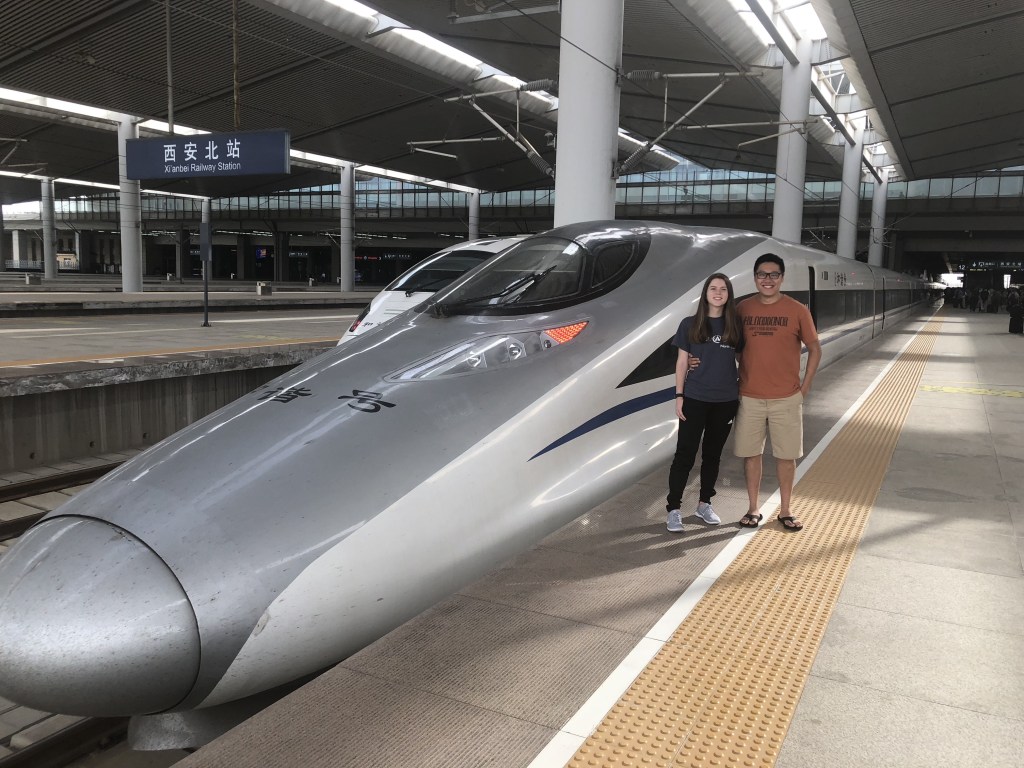 I knew nothing about Xi’an when we arrived, and was shocked to see skyscrapers everywhere. They stretched on for miles when driving in from the train station, and the similar designs led to a uniform appearance that I’d never experienced before. I kinda felt like I was in Squidville, and the view was amplified through my hotel window. We had come to see the Terracotta Army, but I was also here for the cuisine. The spicy food found in this part of China made me want to stay here at least a week! Fewer foreigners visit Xi’an, and Xi’an is a quieter city, so it was a new experience coming from Beijing. Xi’an is technically the first capital of China, and everything here is much older than in Beijing. 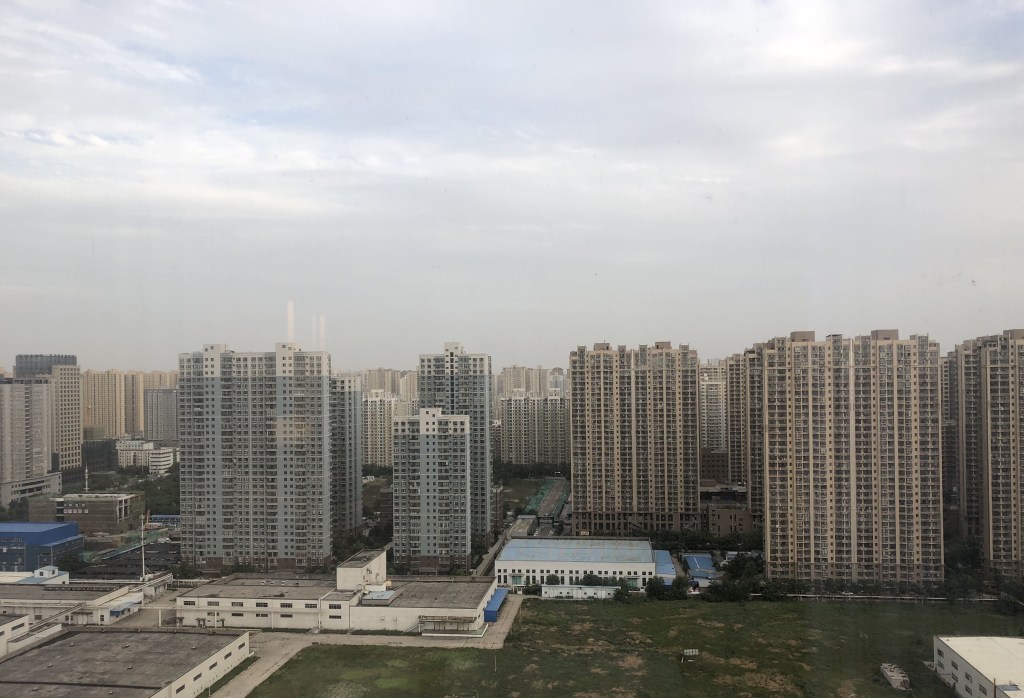 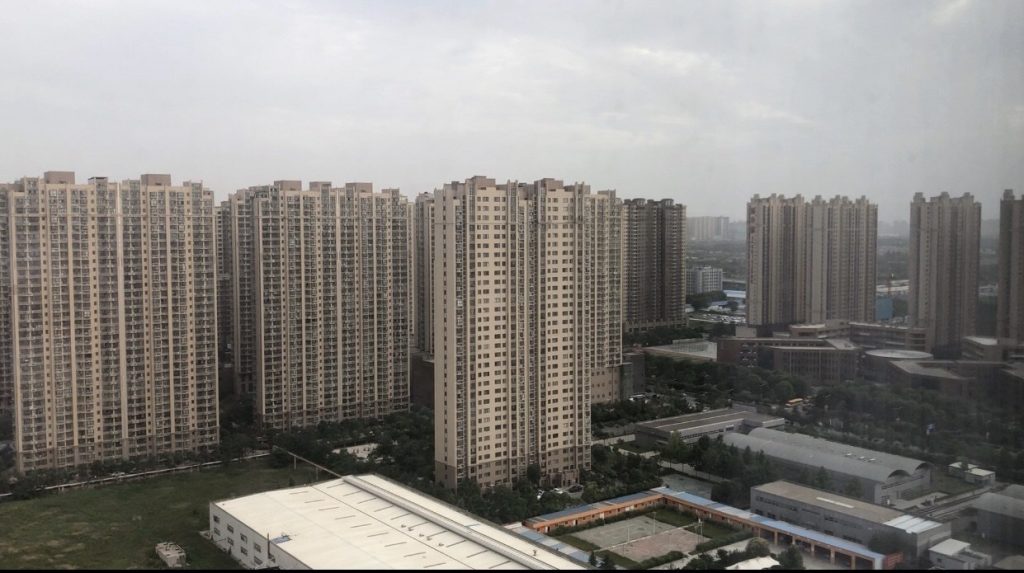 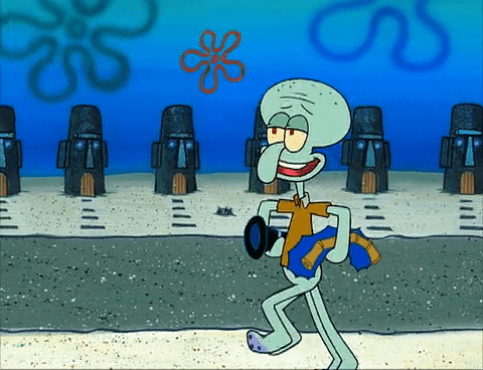 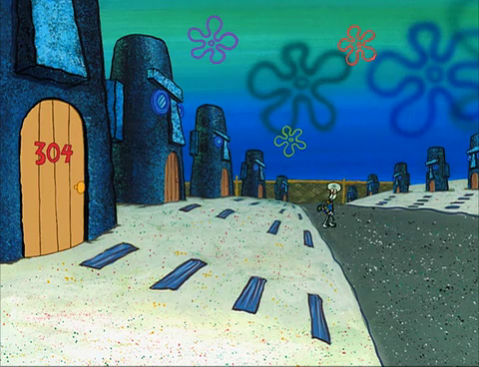 On 5/28, we met our tour guide for my final private tour in China. She had grown up in Xi’an, and her parents were farmers nearby. We drove about an hour to the site, and she used the time to tell us about the Terracotta Warriors. They were built around the time of 200 BC for Emperor Qin Shi Huang, the “first” emperor, who had both conquered and unified much of China during his rule. At age 13 when he ascended the throne, he’d decided he was going to both conquer China and build a giant tomb for himself. When I was 13, I’d decided I was going to conquer pre-algebra. Qin Shi Huang was a very powerful emperor, with sophisticated armies and intel. The Emperor wanted to be buried in a tomb surrounded by a river of mercury (thought to be healing at the time), and an entire army of life-sized Terracotta Warriors. Archaeologists also believe that he had crossbows rigged up to fire if anyone entered the tomb, Indiana-Jones style. The warrior army was accidentally discovered by farmers in 1974, when they were attempting to build a well during a drought. The government compensated these farmers heavily to take their land and preserve what they’d found. 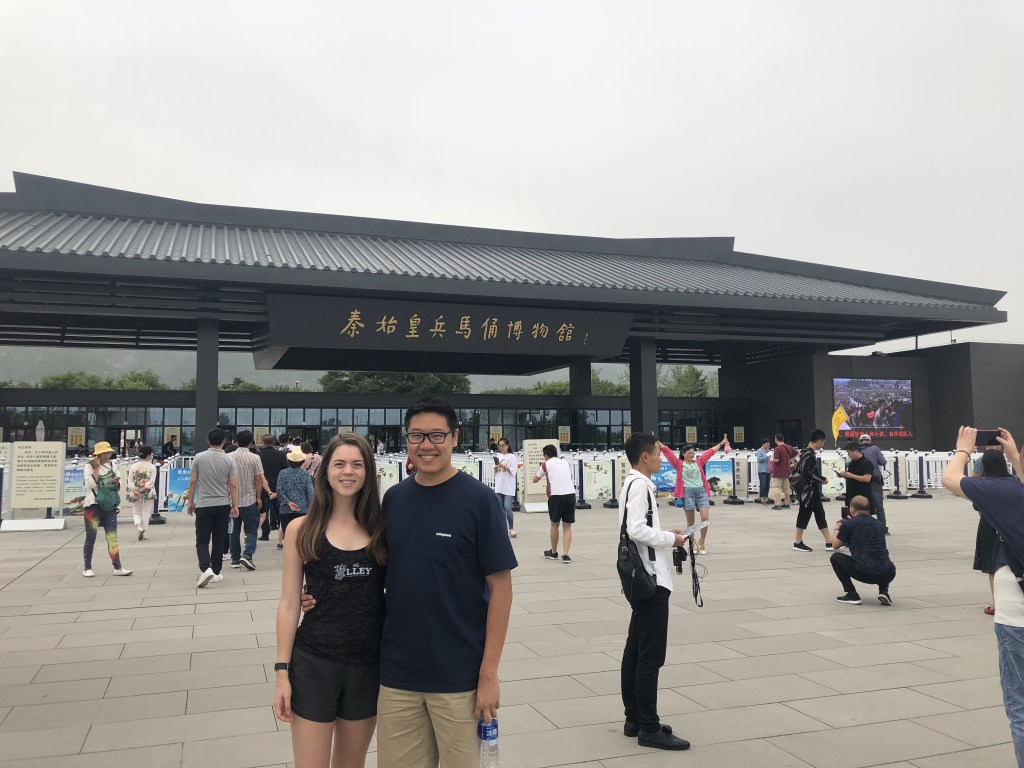 There’s no simple way to explain how huge and impactful I found the site of the army. This army is older than Jesus. Each warrior is excavated and put back in their original place, a careful ongoing process that is taking years. When you enter each site, it’s like the earth had been sucked up from around the army, and the warriors are left staring at you. I can’t begin to imagine the effort and skill it took in 200 BC to create each soldier, with different ranks, facial expressions, and armor style. I had seen pictures of the warriors before, but only close-ups; I’d never seen them all in their natural formation like this. The horses may appear short next to the soldiers, but they were modeled after smaller Mongolian horses known for their speed. The Terracotta Army was finished in vibrant color, but the air and atmosphere quickly faded the paint once these parts of the army were excavated. Elsewhere on this property, there are warriors still underground, with their color still preserved. They’re working on ways to preserve the color once excavated, so that colorful soldiers may be open to the public someday. As of right now, parts of the calvary, infantry, and headquarters of the army are excavated and open to the public. The most famous excavated site is of the infantry, which is the biggest and the first discovered. All of the formations, rank and dress were true-to-life at the time, as the emperor had a truly impressive commitment to detail. We were able to walk through and see some other items he had commissioned for his resting place, but his actual tomb is still encased in mercury and won’t be excavated anytime soon. Emperor Qin Shi Huang is also known as an emperor with cruel practices, and trapped the workers of his tomb inside with him to ensure that all secrets were kept. It remains close to the Terracotta Warriors, in an undisturbed tomb mound that resembles a hill. 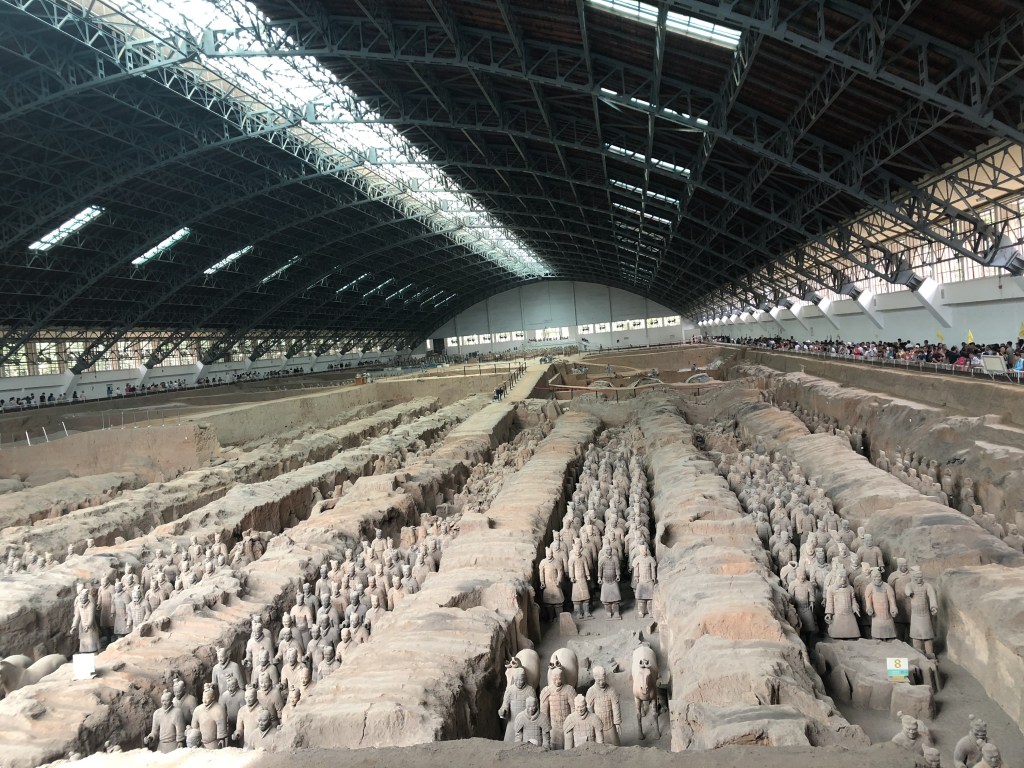 You can see depressions in the soil next to the warriors, because this particular site was used as a famers’ graveyard. They had no idea that an army was directly below the plots. In person, this view is breathtaking. 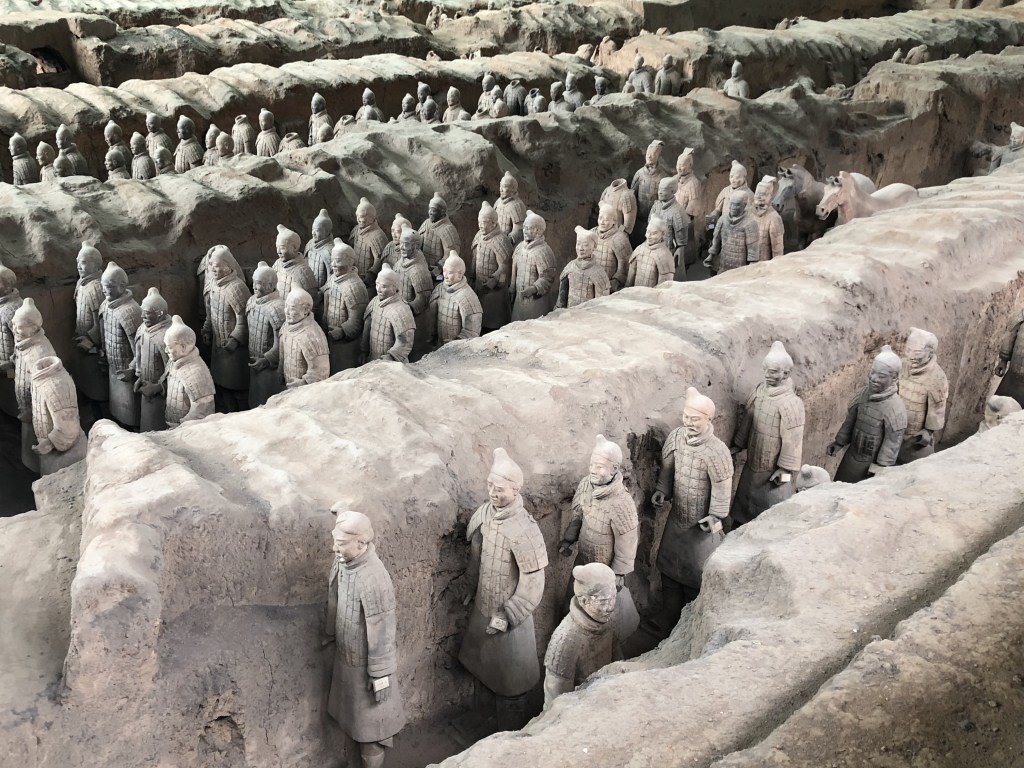 This is the infantry, mostly recognizable by a knot on the right side of their head. Some heads are missing, as the site went through a lot of abuse over 2,000 years. The edges of the site also show soot from a fire long ago. 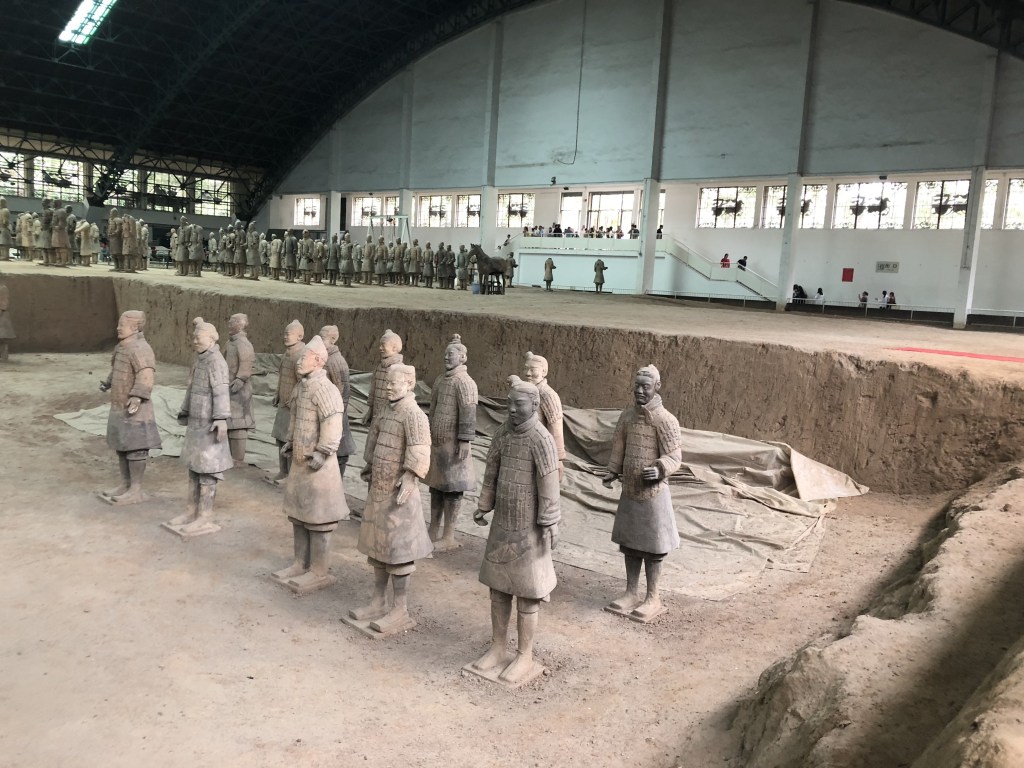 Warriors moved for the restoration process. They’ll eventually be placed back where they were found. 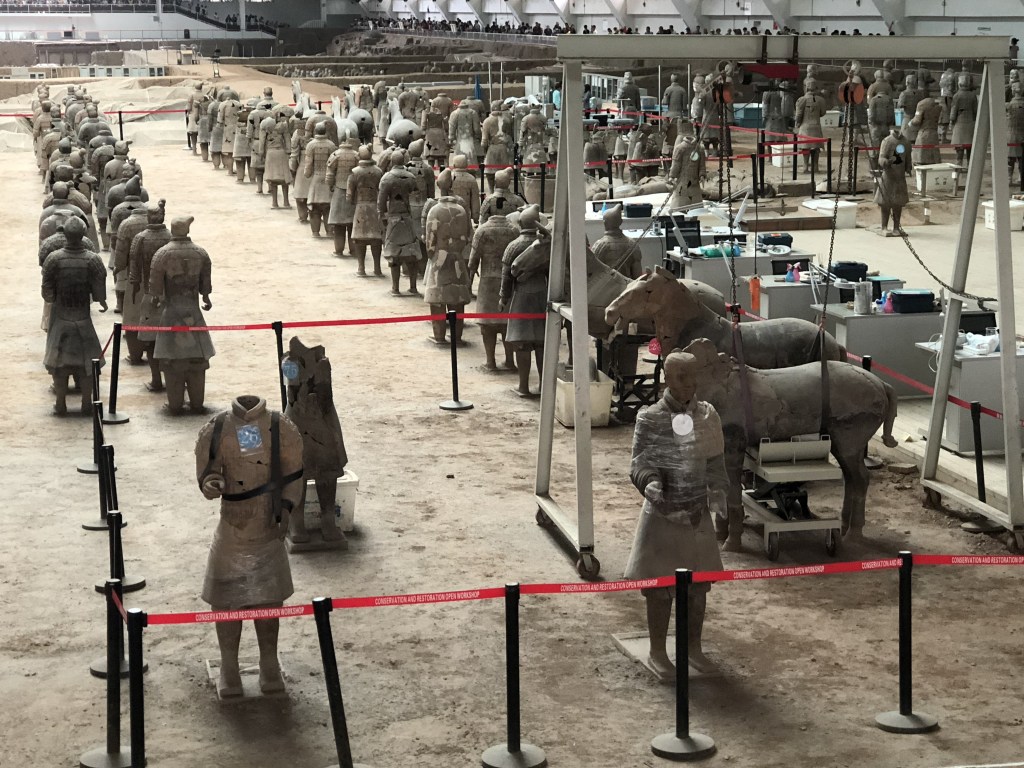 The lab was out in the open, and you could see the workers moving around the site during the excavation and restoration process. It’s extremely slow going, and tedious work, but fascinating to see all of the workers doing their own thing. 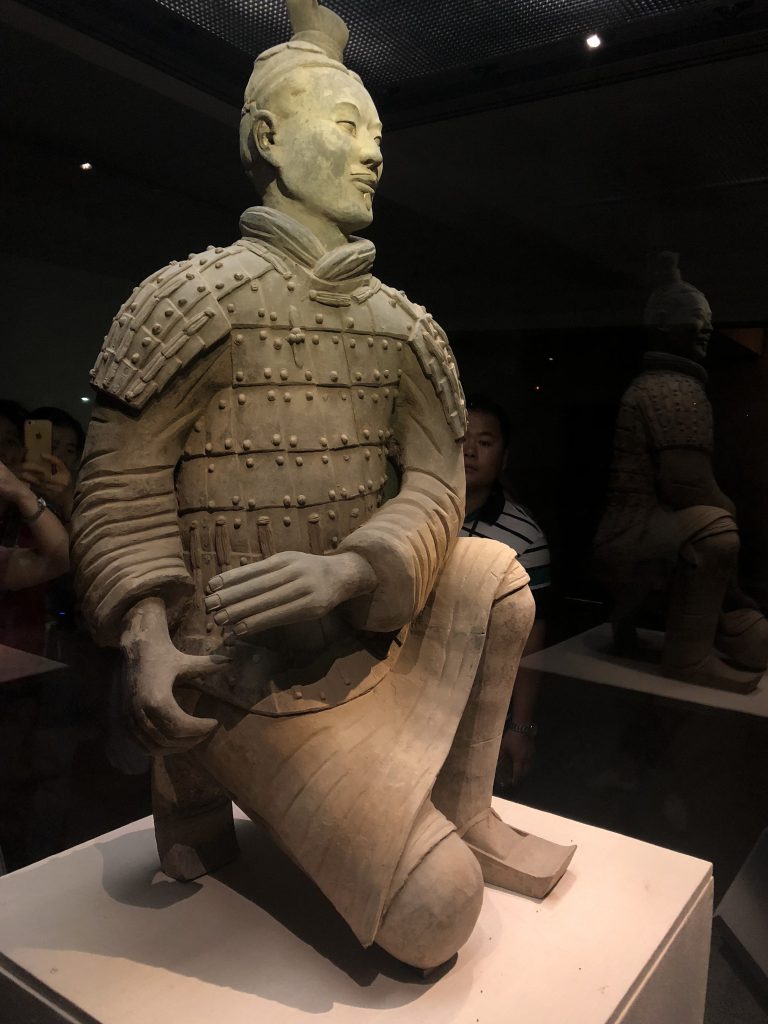 I believe this guy was lower-ranking, and holding a weapon. The weapons and chariots were wood, and rotted a long time ago. On the sites, you can see bits of bronze that made up the spear tips. 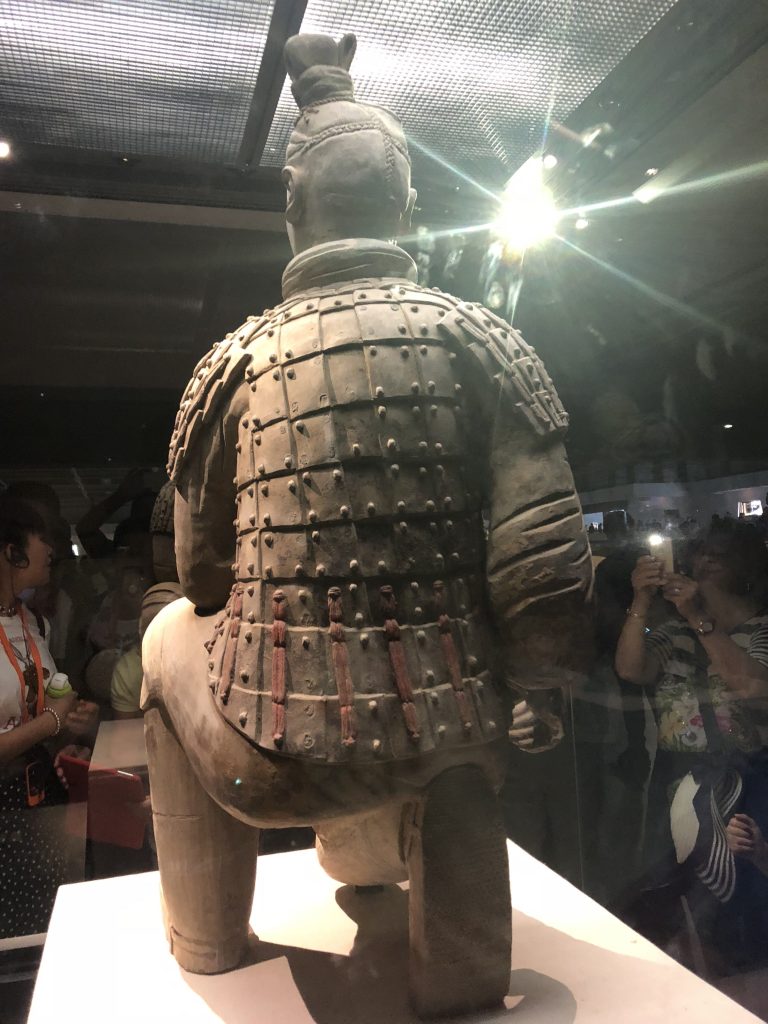 Some of the original vibrant color survives. 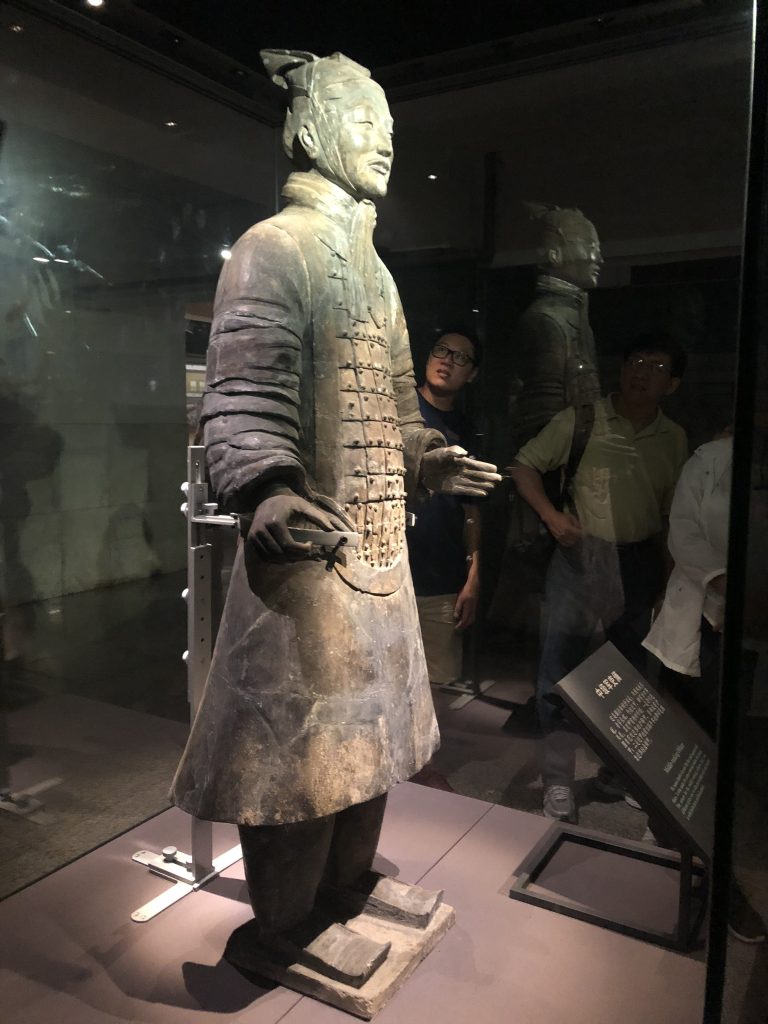 A middle ranking general. All of the warriors had a bit of a stomach, leading historians to believe that it was a desirable trait. 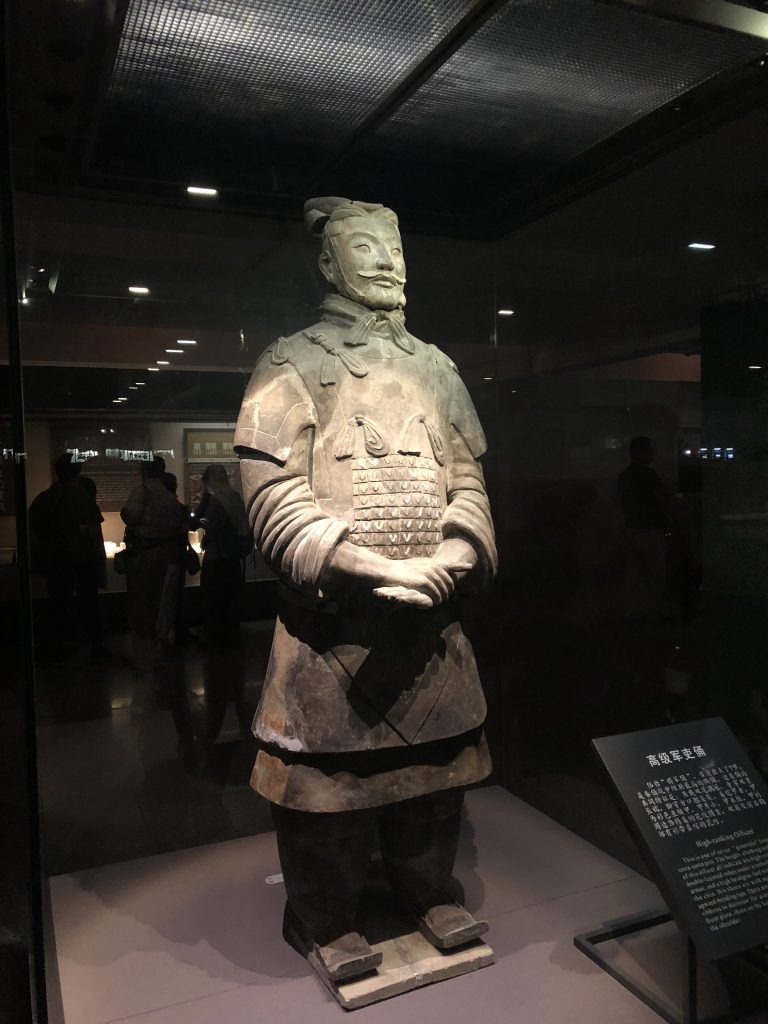 A high-ranking general, positioned for a sword under his hands. 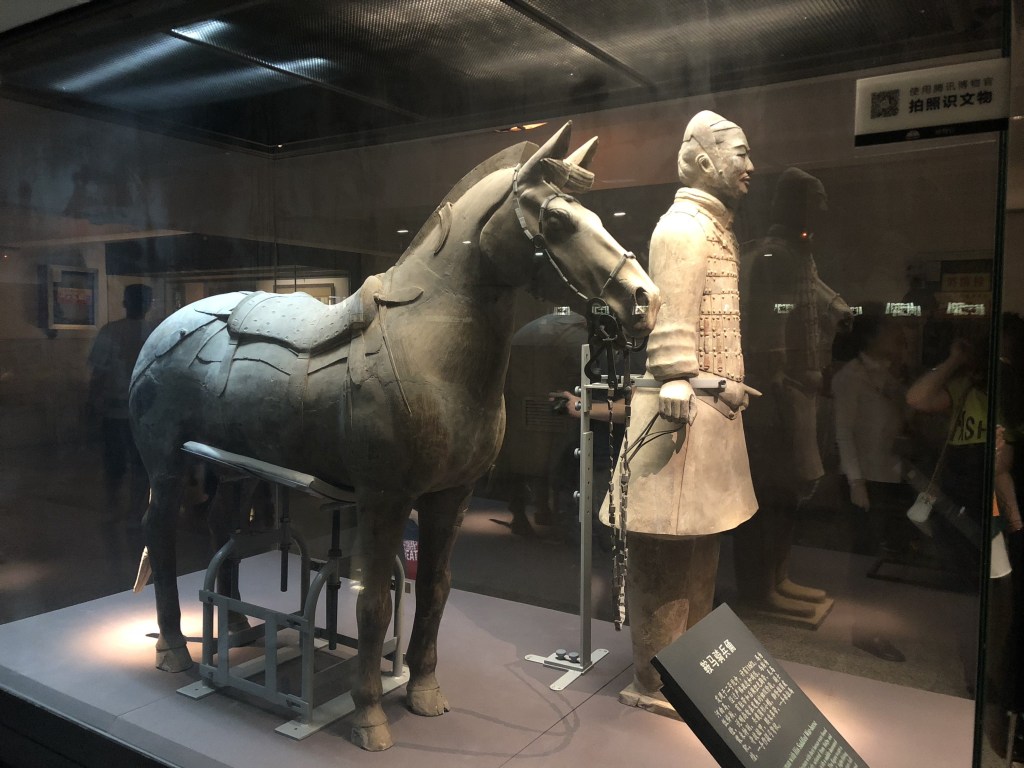 A Mongolian horse. There’s some debate amongst historians on whether the emperor intentionally made his soldiers larger than life, or if the soldiers were naturally large for that time to be elite. Either way, Mongolian horses are still rather small. 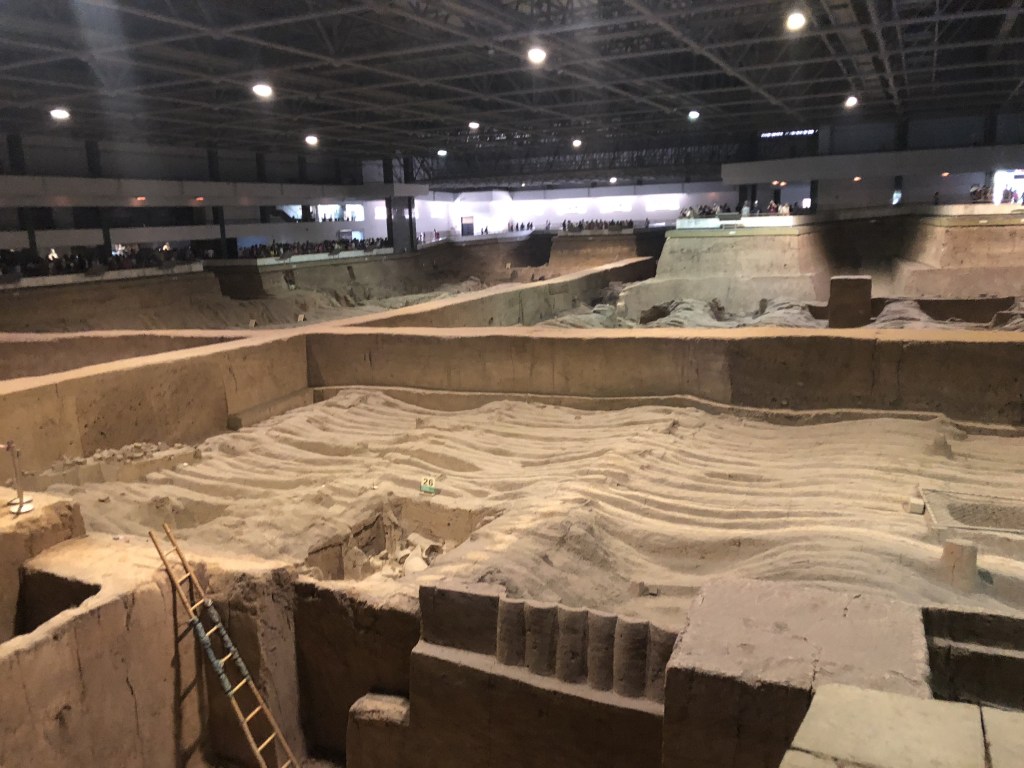 Radar technology has detected warriors underneath the soil at this site. The excavation process is ongoing, but it’s exciting to picture colorful soldiers standing at attention underneath the surface.

Overall, the Terracotta Warriors were worth the 5-hour trip to Xi’an by themselves. However, we used the rest of the day to visit the Little Goose Pagoda and the Xi’an City Wall.

The Little Goose Pagoda was built under the Tang dynasty between 707-709, 900 years after the Terracotta Warriors were buried. Our tour guide explained that Buddhism entered China from India, and the construction of this building was inspired by a story in India. It’s a long story, but monks in India were praying for relief from hardship, like rain in a drought. Buddha either appeared as a goose or sent a goose, and once he realized the monks were simply praying, the goose died in front of the monks. It was a message to the monks that they shouldn’t simply pray; they should go forward and help the people by doing something. In 1556, the Shaanxi earthquake split the pagoda dramatically down the middle. However, the foundation of the pagoda is so well-constructed, that it was one of the only things to remain standing after that earthquake. Superficial remodeling has been done to the front of the pagoda to conceal the crack, but you can apparently still see it from the inside. Today, the pagoda is as famous for its construction as it is for its Buddhist history. Today, only 17% of the Chinese population is Buddhist, but Buddhism remains an essential part of the culture and architecture of China. 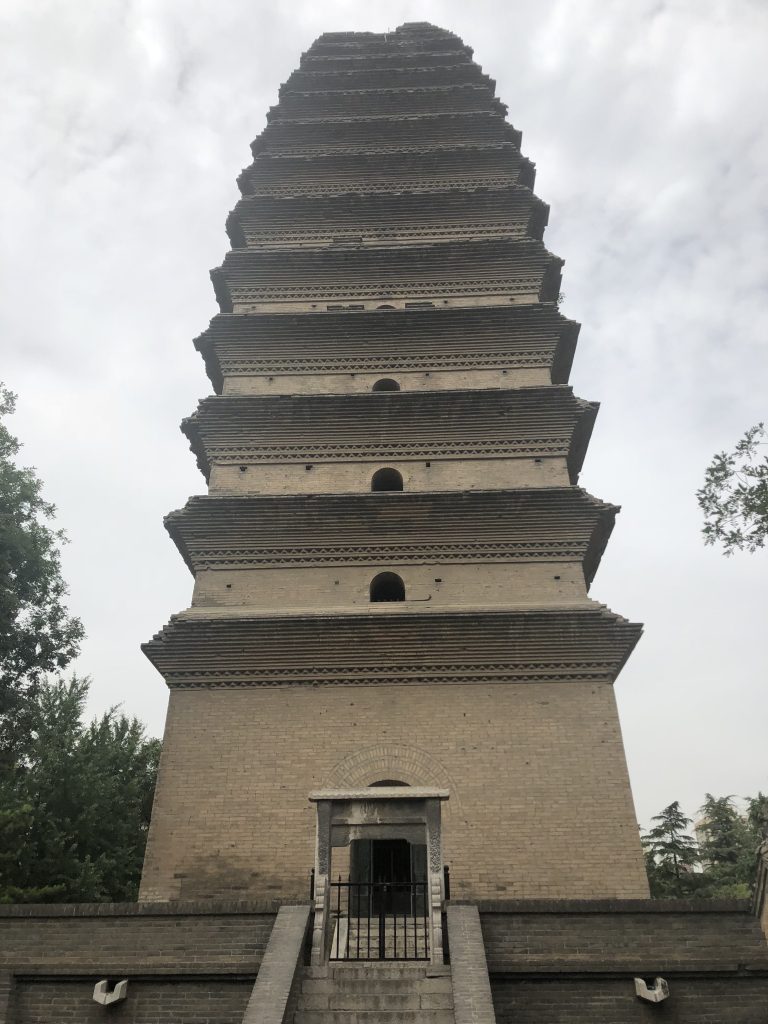 There’s a Big Pagoda in Xi’an as well, but it’s been significantly remodeled. As a result, this original Little Pagoda is more of a destination for tourists and sightseers. 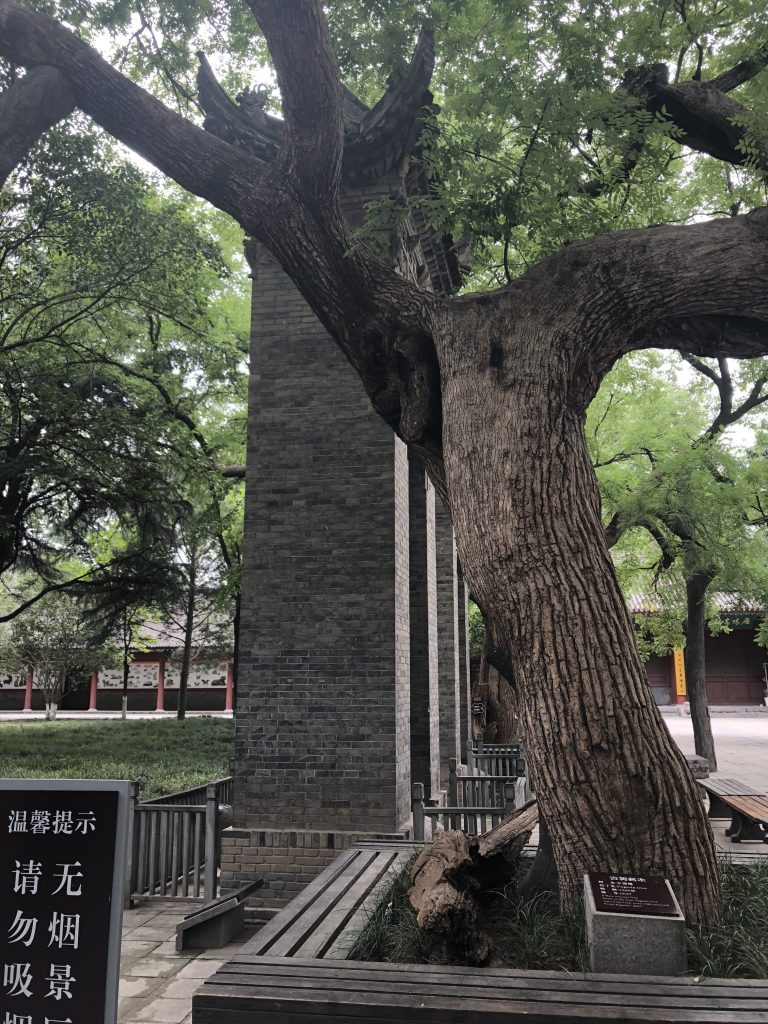 Fun fact: this nearby Pagoda Tree is about as old as the Pagoda itself, at 1300 years old.

Our last stop was the City Wall in Xi’an, built in the 14th century during the Ming dynasty to protect the capital city. The wall is also surrounded by a moat. It’s very impressive, built as a military defense over an 8-year period. Unfortunately, the Ming Dynasty moved the capital to Beijing shortly after the wall was completed. The wall has only seen battle in 1926, around the time of the Chinese Civil War. It’s been remodeled many times to maintain its shape, and it is now used as a lovely place to bike and walk with a view of the city. Its military uses are still recognized as valuable today, and the wall was used in military strategy during the Second World War. 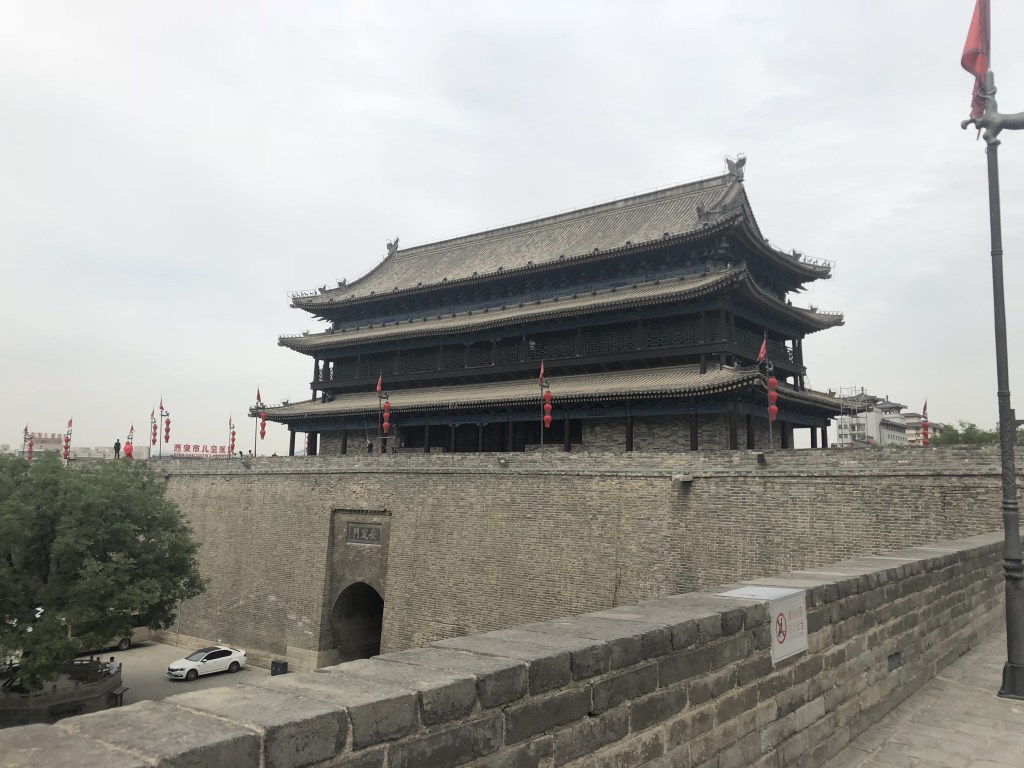 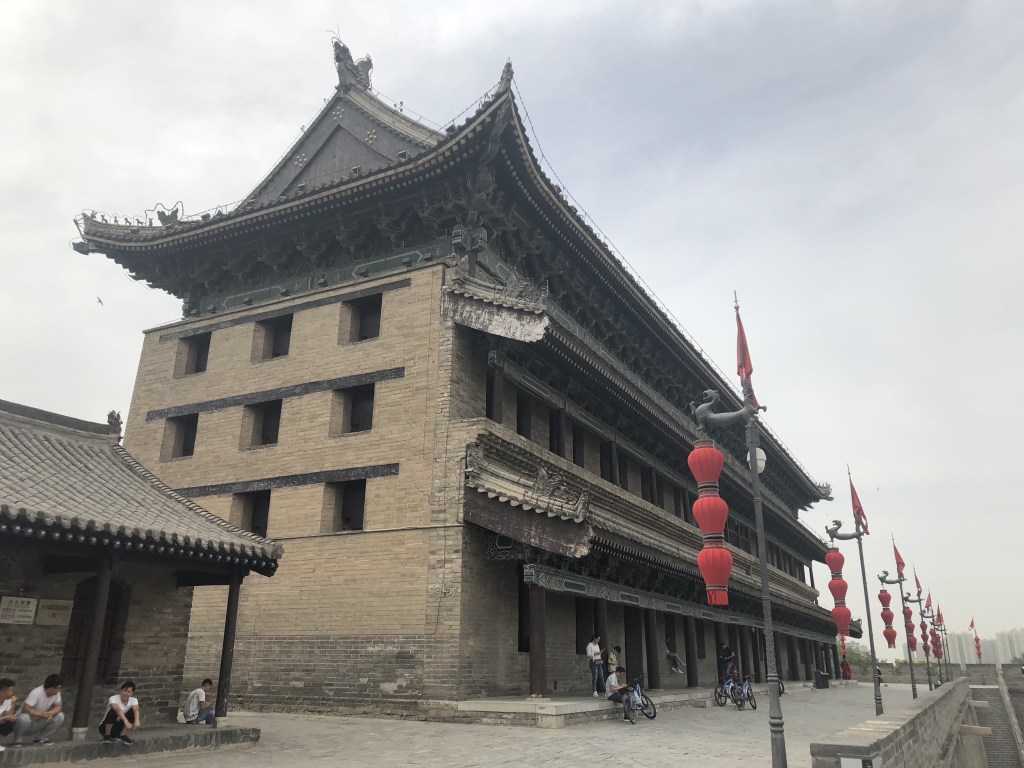 My time in Xi’an was sadly short, and I loved it and all its skyscrapers. I would love to re-visit the Terracotta Warriors in 10-20 years, to see what else they’ve excavated and discovered. Until then, I’m headed to Shanghai for the rest of the trip!