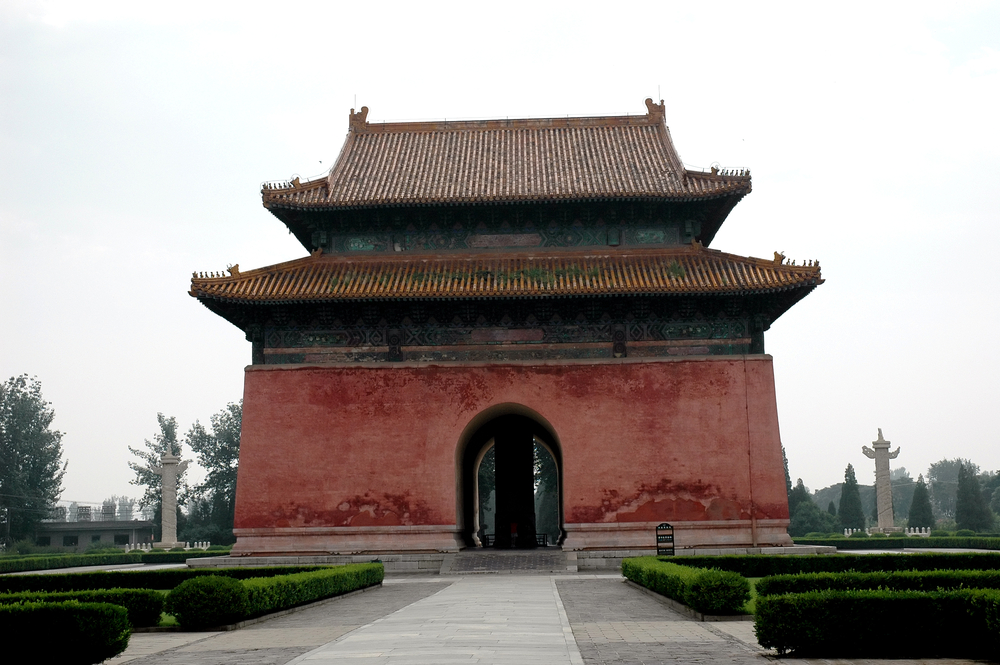 Beijing: The Great Wall, and the Ming Tombs

According to my Fitbit, I climbed 83 flights of stairs on the Great Wall of China. I’d been excited to climb it, but I didn’t realize how much I’d love it or how exhilarating it’d be. I could’ve stayed up there for hours.

The Great Wall was our first stop on 5/24, and it was about an hour’s drive from downtown Beijing. We were with our same private tour guide, which is awesome because I didn’t even have to think about how to arrange the trip. You can’t see the mountains from downtown, but they quickly began to rise on the horizon as we got closer to the Wall. We arrived at the site to climb the Badaling portion of the Wall, which was built in 1504 under the Ming Dynasty. This is widely regarded as the “easiest” section of the wall to climb. In hindsight while writing this post, I believe that most people can climb it, but it requires some real athleticism to climb it fast. The view from the bottom was a little steep and foreboding when we started. 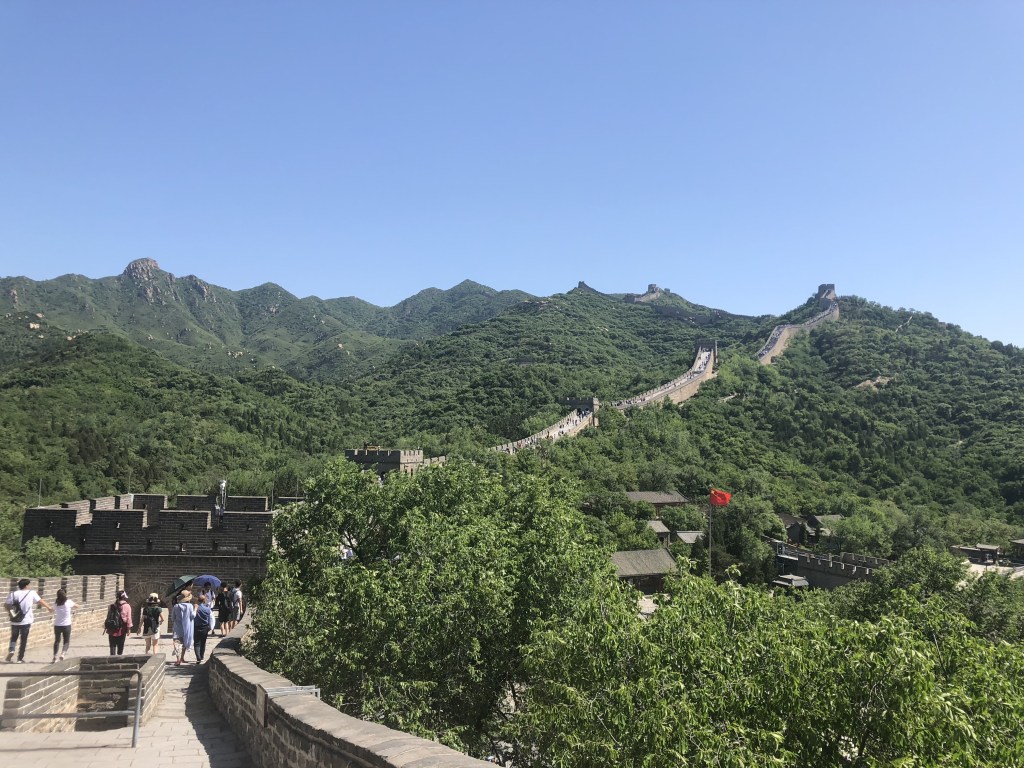 The “top” of this section is clearly seen in this picture, but visitors could climb beyond it if they wanted to.

Kevin and I started up the wall at a fast pace, and my heart rate topped out around 175 bpm. We weren’t running, or even close to it, but the wall was comically steep. The first portion was also slanted sideways, so it felt like I was going to fall off or maybe slide to the other side of the wall. I had to take a few breaks, mostly to get my bearings on what a “straight line” was! What’s interesting about the Great Wall is that the steps are all different sizes. Some steps were one brick tall, while the next step could be three bricks tall. This made for a climb that required my full attention. Some parts of the wall had these steps, while others just had a flat path. It was so steep on the parts that sloped downward, that my old tennis shoes didn’t have enough traction to keep from sliding on the worn bricks. At times, I looked like a professional snowboarder. 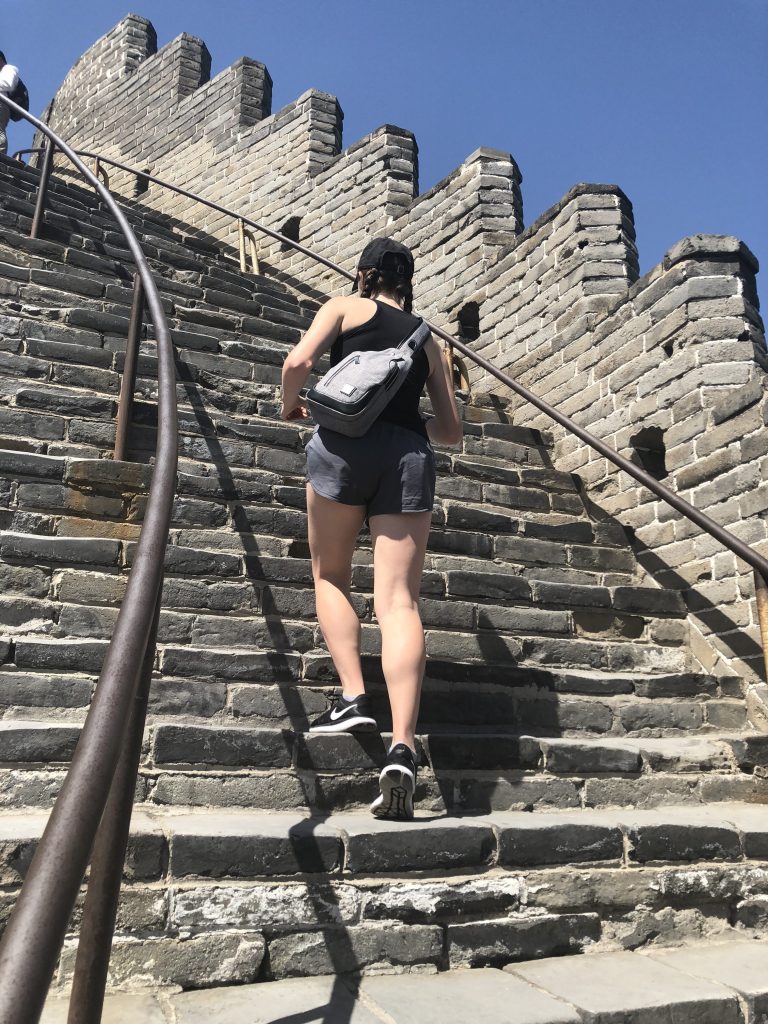 Handrails were installed on some portions of this section, but not all. Luckily, the steps were so steep here that they were installed– but the rails were still way too hot to touch in the sun.

It was about 10:30am, and there weren’t many people on the Wall yet. While climbing, I could see the surveillance cameras stationed in several spots (a constant sight in Beijing), as well as a sound system with a steady stream of announcements in an ambient female voice. Kevin told me the announcements were saying things like “Please no horseplay,” and “We hope you enjoy our vacation to the Great Wall.” We made it up to the top in about 15-20 minutes, which is where one of the observation decks are. Tourists use these structures as shady places to rest, and meet other people climbing the Wall. Kevin and I were in our UT shirts and cap, so people from Texas quickly found us! We met a few students from Texas A&M Commerce that were studying abroad, and it was fun seeing people from all over the world. Domestic tourists were still the overwhelming majority, however, and Kevin could hear them joking about how foreigners could never make it up the wall.

Kevin’s parents were quick to follow behind us, and we used Mr. Chow’s phone to FaceTime my family from the Wall. It was about 9:30pm there, and I was surprised the connection and reception worked so well. The view from up here was breathtaking, and there were almost no people beyond the “top” of this section. It was so still and weathered, without those handrails or trashcans, that it was harder to pinpoint the time as 2018. I could really feel the age of the Wall. 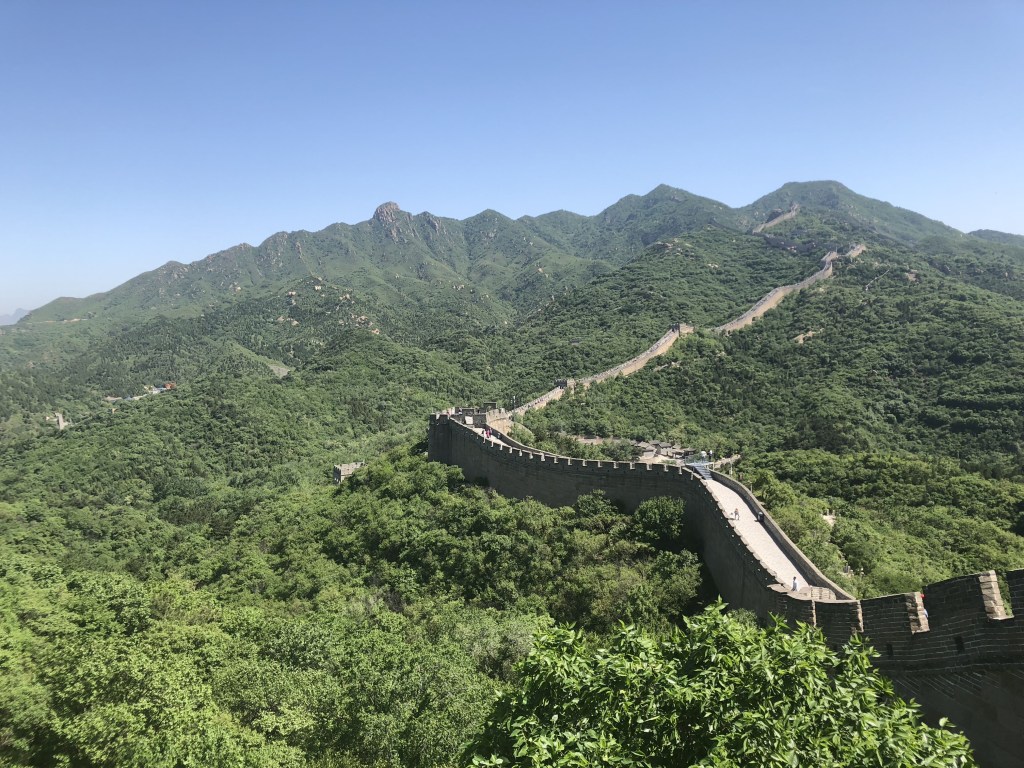 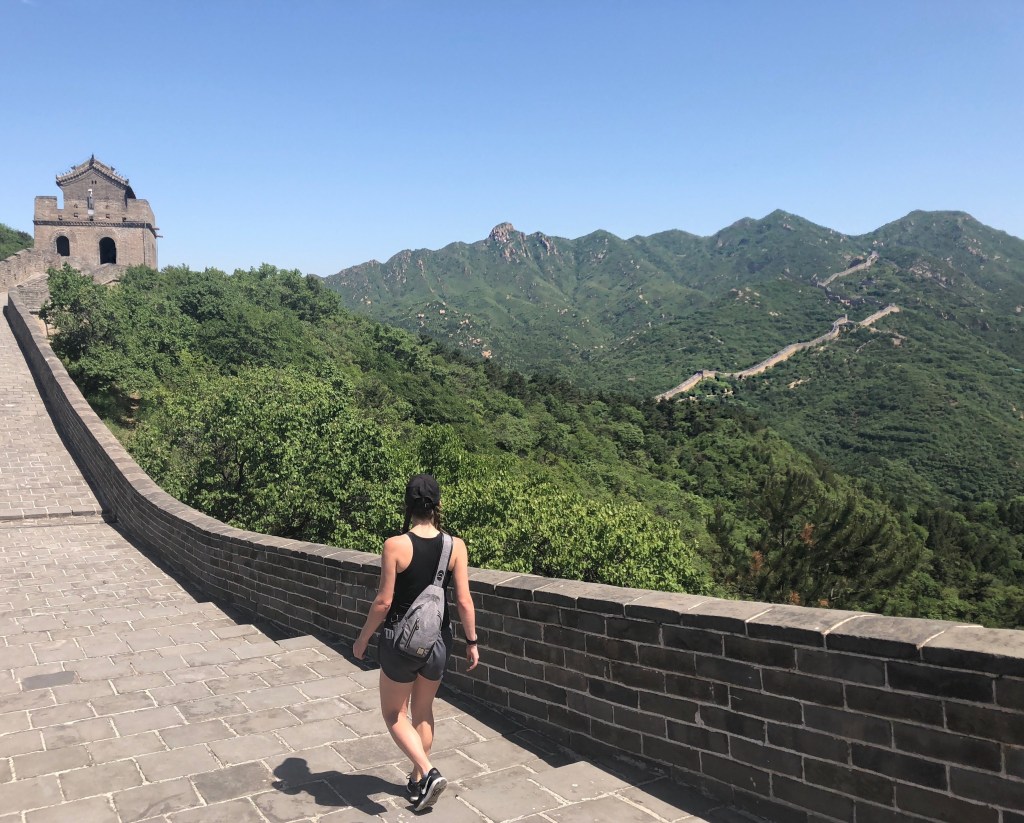 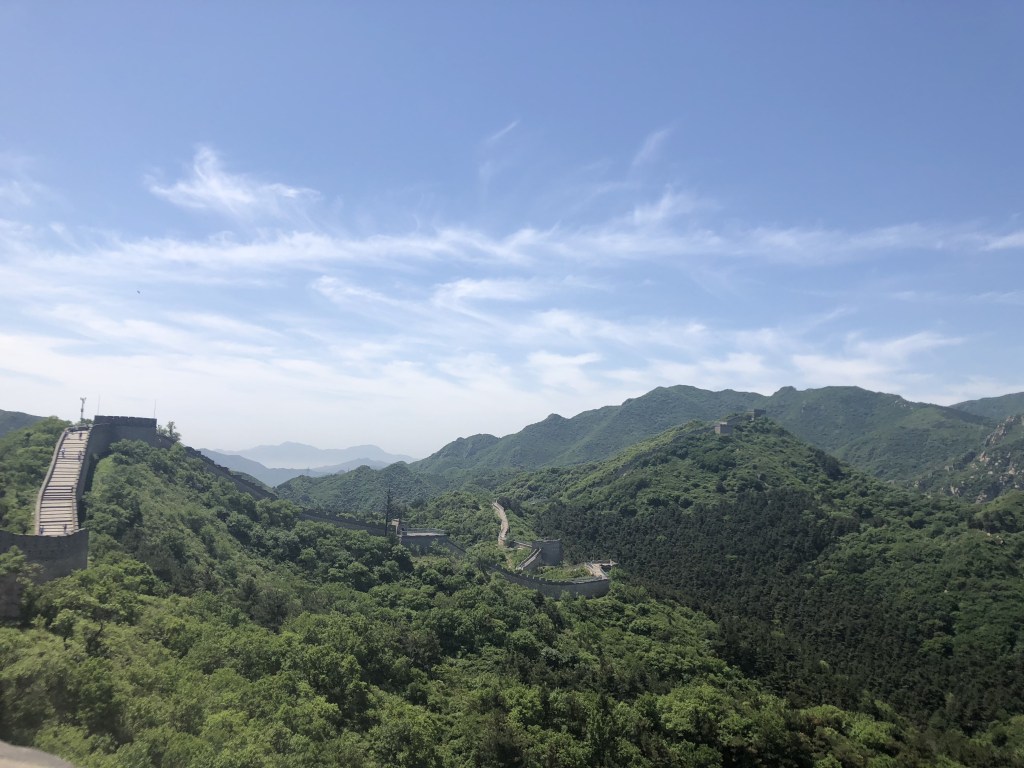 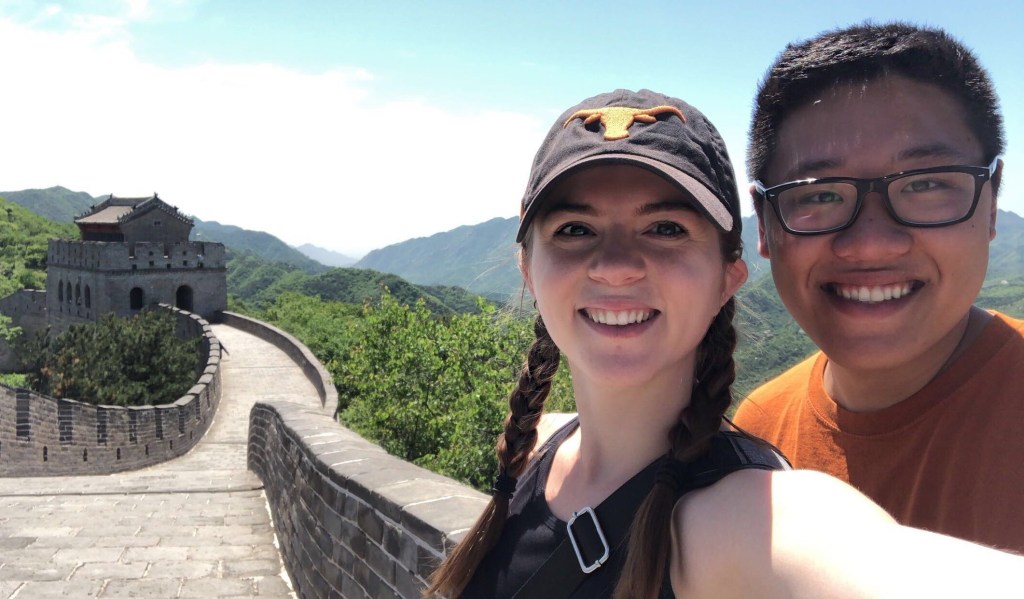 After a certain point, the Wall was blocked for renovations, so we turned around and headed back down. Our next stop was the Ming Dynasty tombs; 13 tombs were built for 13 emperors, spanning from 1409-1644. There were 16 emperors of the Ming Dynasty overall, but two were overthrown and one died by suicide when the dynasty itself was overthrown. I haven’t taken World History since sophomore year of high school, so my tour guide definitely had me digging back into my brain for that information. We entered the ceremonial Shengong Shengde Stele Pavilion, which held the funerals for each emperor. A sculpture of Bixi the baby dragon held a memorial tablet (Bixi is my absolute favorite, and looks like a turtle). Beyond the Pavilion lay the Spirit Path. 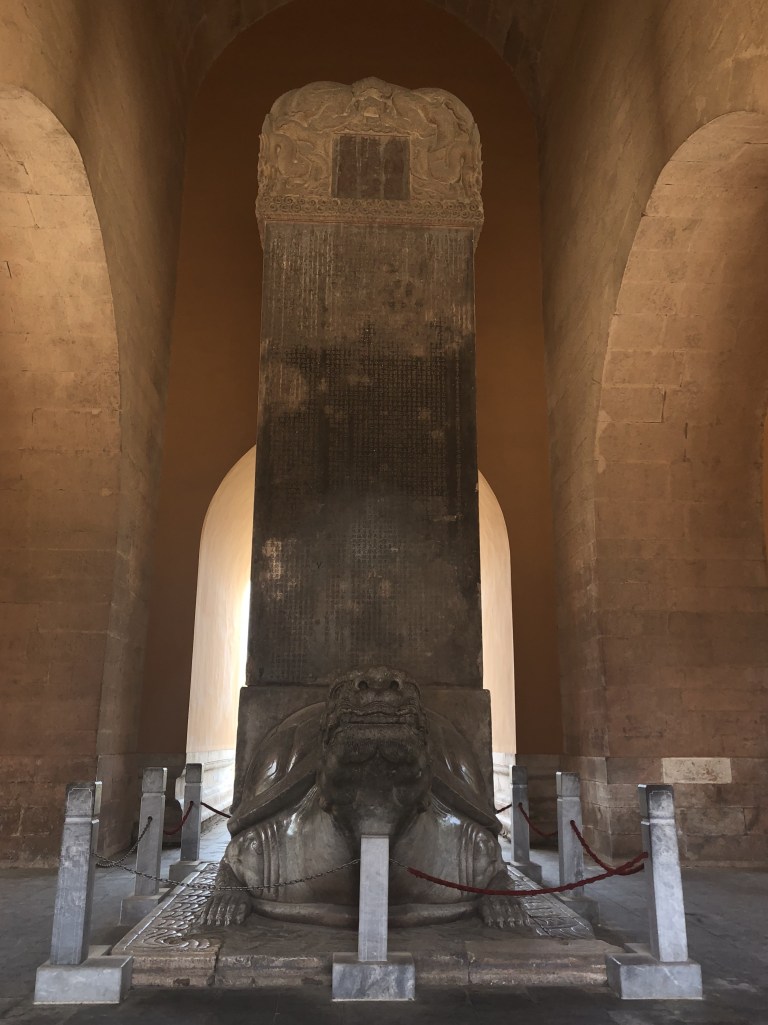 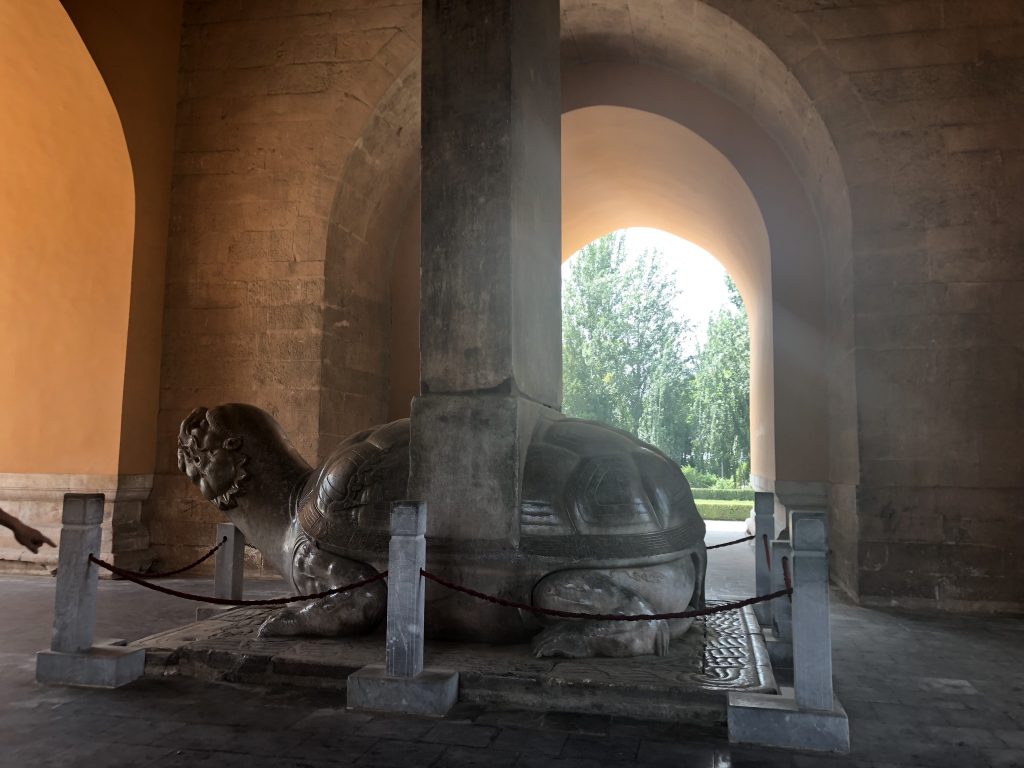 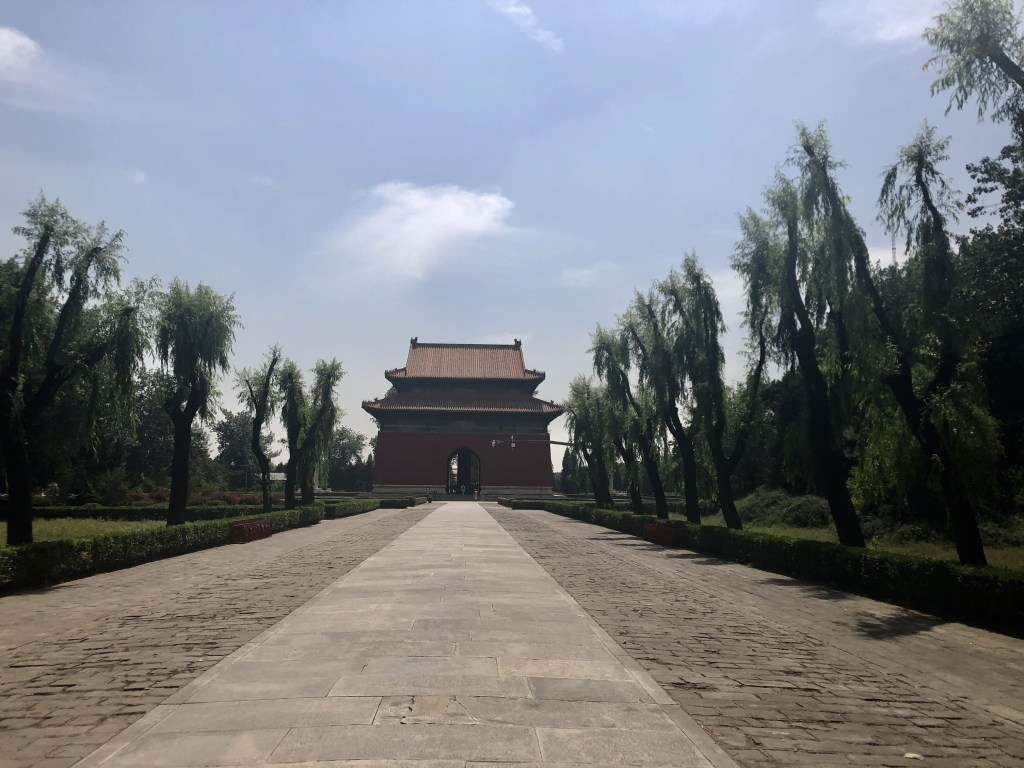 The Shengong Shengde Stele Pavilion, built in 1540, with Bixi inside!

The 8,000 meter long Spirit Path was built for all 13 emperors that died while in power. We walked along the path, past the original sculptures that guard the emperors in death. The guards were four lions (for portraying magnificence), four xiezhai (mythical beasts with a single horn to ward off evil), four elephants and camels (representing the vastness of imperial territory), four qilin (creatures associated with royalty) and four horses (to represent the emperors’s success and trusted mount). In each group one pair is standing and the other kneeling. The human figures are four military officials, four civil officials and four meritorious officials. The people of the Ming dynasty would carry each emperor’s body in a procession from the Forbidden City through the Spirit Path, which was a least a 2-3 day walk at the time. 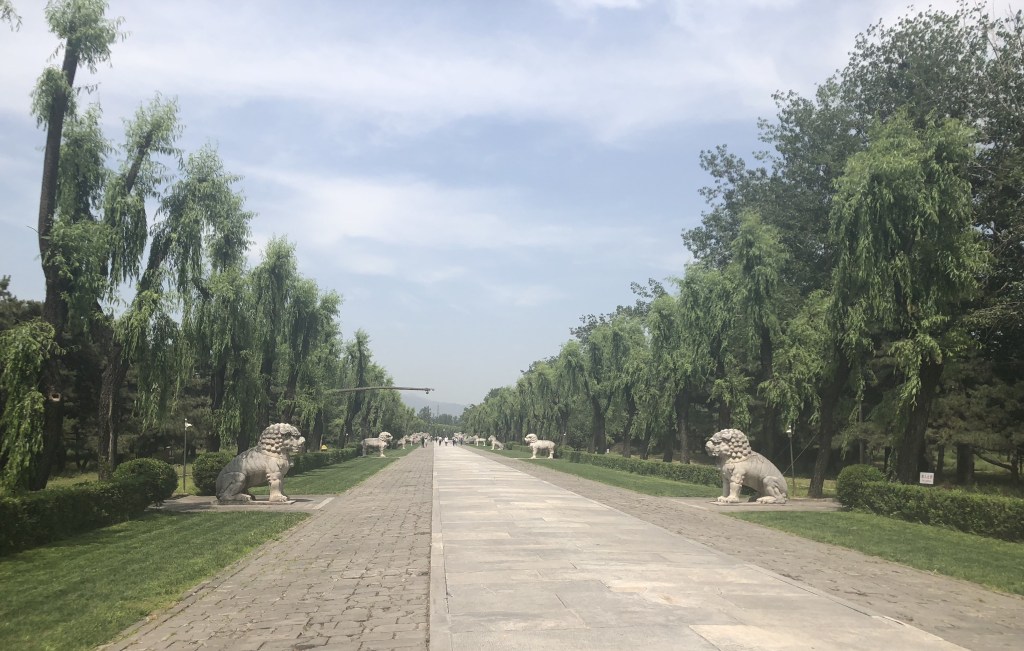 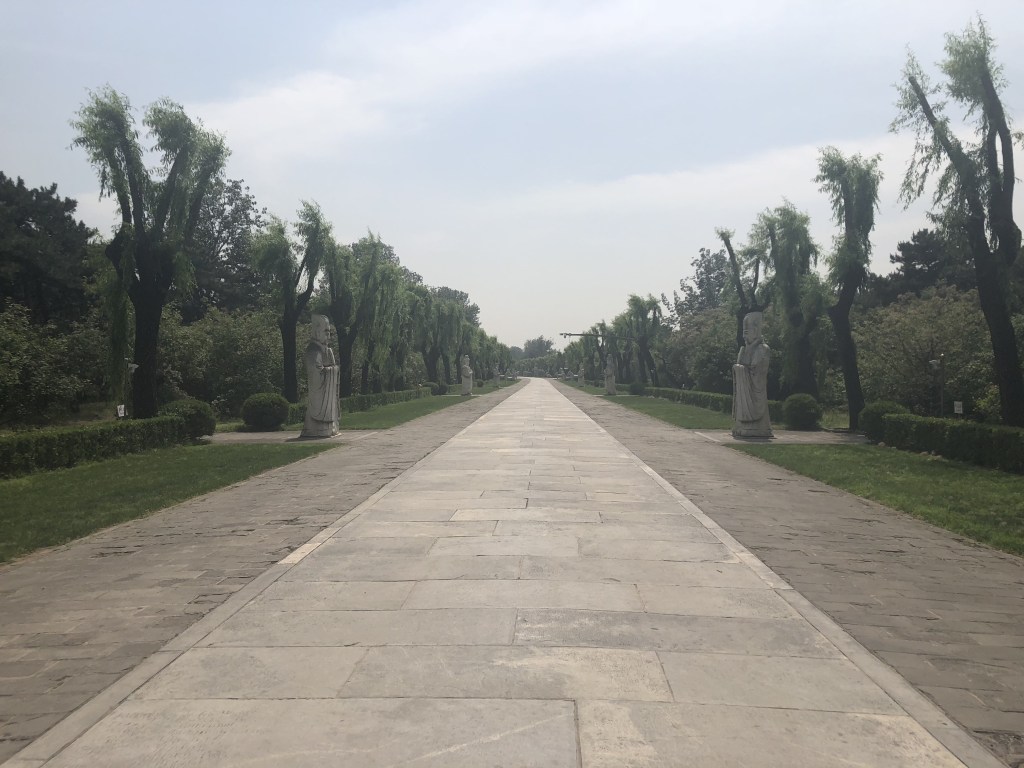 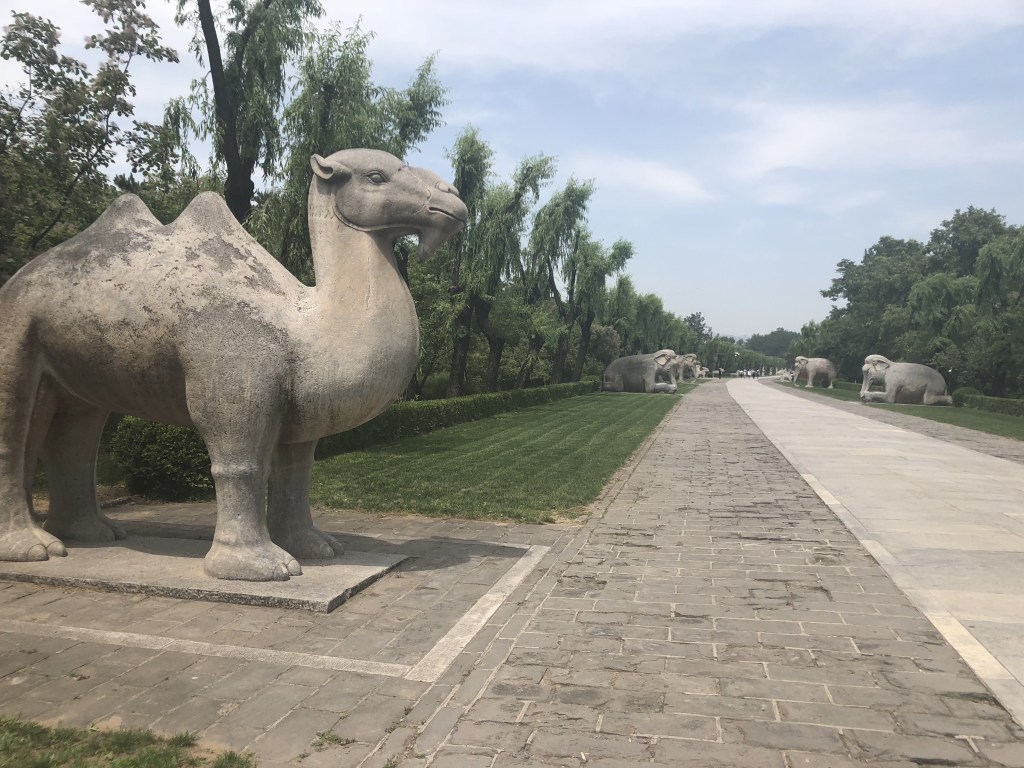 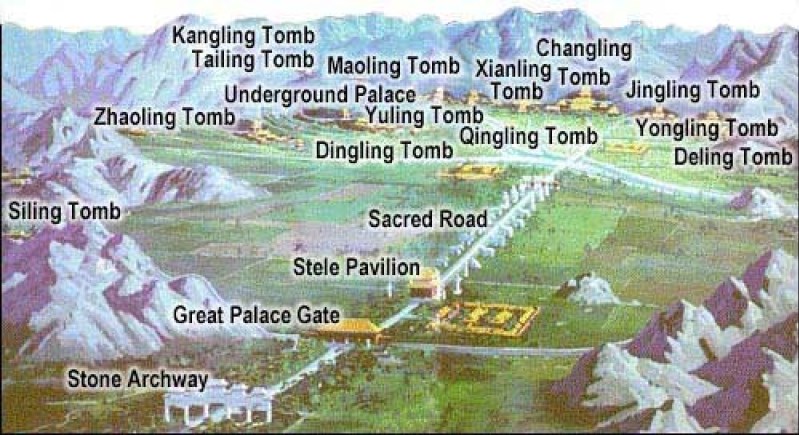 At the end of the Sacred Path, we hopped back into the car to head to the Dingling Tomb. The Ming Dynasty laid out each tomb with Feng Shui principles, so each tomb site was carefully chosen. It would’ve taken the people of the Ming dynasty another long while to carry the emperor from the Sacred Path to his tomb.

The Dingling Tomb, our next stop, is the only tomb from the Ming Dynasty that has been excavated. It was opened in 1956, and many parts of it were subsequently destroyed during the Cultural Revolution that followed. The Wanli Emperor (Zhu Yijun) and his two empresses had their bones burned, and the palace above his tomb was also destroyed. However, we were able to go underground and see the Wanli Emperor’s tomb. This tomb was built while the emperor was still alive, and he held parties inside the tomb once it was finished. He also had all of the workers who built his tomb killed or otherwise silenced, which is not quite as whimsical. The tomb itself was built in the 1580s, and was very impressive. 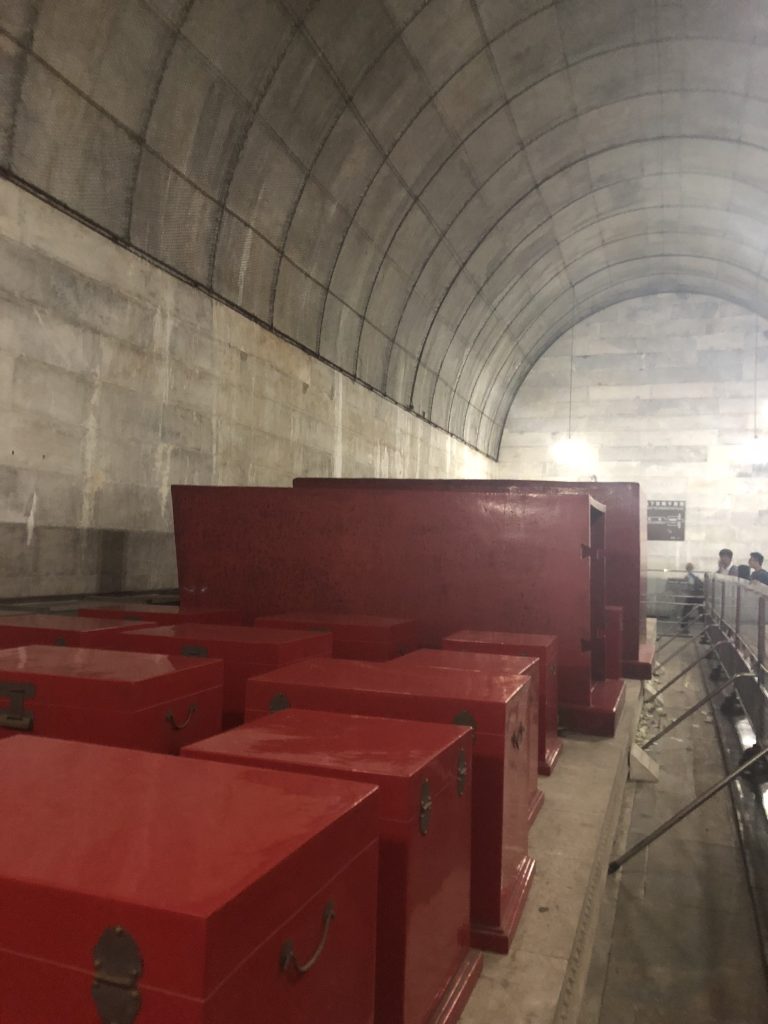 The bones were gone, and it was still a big tomb for 3 bodies. The emperor had 2 empresses at the same time, because his first empress could not bear children. There were separate “rooms” beyond this that I’m sure held great parties.

Overall, today was a good look at the 1500s and the Ming Dynasty, with both the Badaling section of the Great Wall and the Ming Dynasty Tombs. There’s one more tour day full of history ahead of me, so I value these blogs to write everything down so I don’t forget where I’ve been! In the last picture I’m standing with a bird’s-eye view of Emperor Wanli’s tomb, seen in the path on the right. In the left corner in the distance, by the mountains, you can see a different tomb that may never be disturbed. 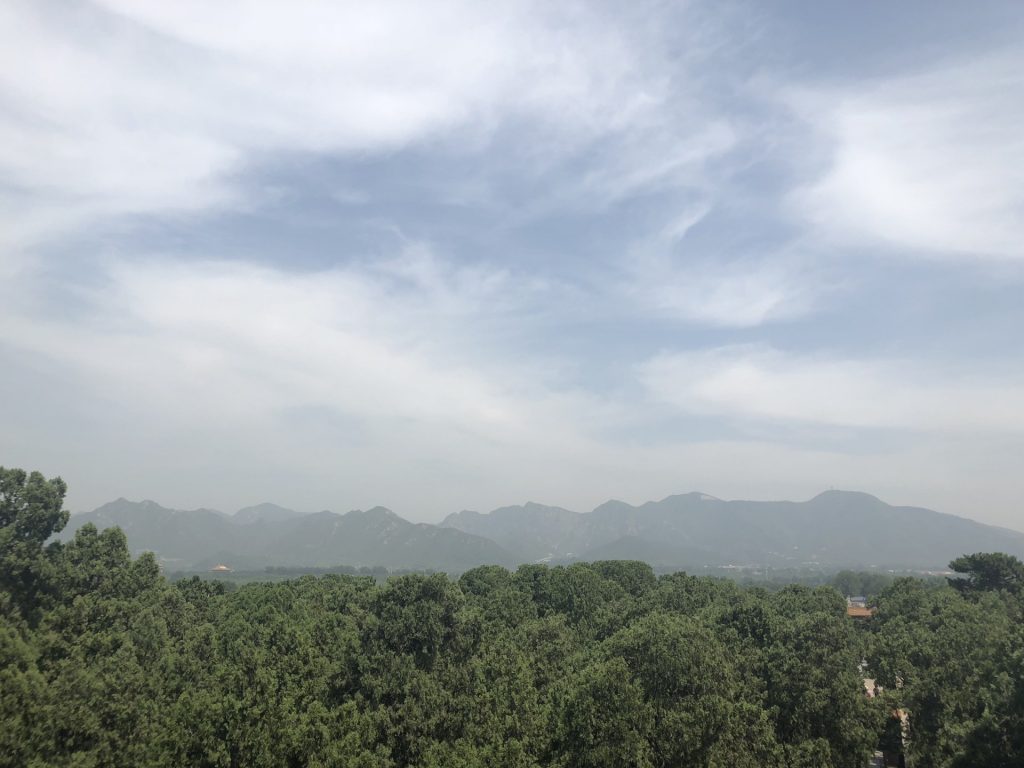